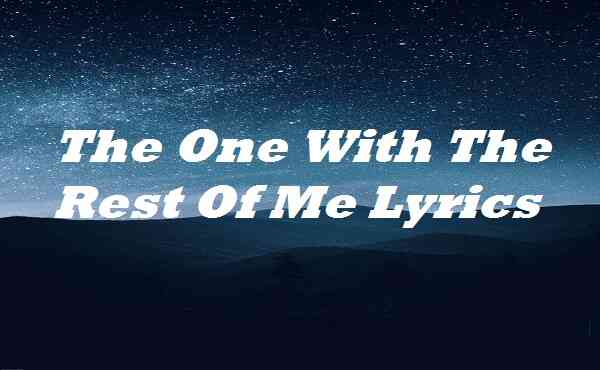 The One With The Rest Of Me Lyrics By Natasha Mosley. Main tiktok song words are the one with the rest to be cause you took the best of me without even asking me.

The One With The Rest Of Me Lyrics

It was always you, nobody else could ever fit your shoes
You’ll always be the one I hold on too
Guess it’s no the time for em and you
Until you move them hoes out the way, let em know their place
Tell em all they need to back down
Wouldn’t even know love it was right in your face
But I ain’t tryna hold you back now

So I guess I’m left to be, the one with the rest to be
Cause you took the best of me without even asking me
I can’t fool myself, can’t mess around with my own mind
My position’s been the same for a long time

I bet all the b^tches you [?] away ain’t even really your type
I know what you need, you that it’s me and you know that I’m right
If I can’t roll over to you then your shoulder is colder than ice
I hope you don’t think I’ll be waiting for you to grow up overnight