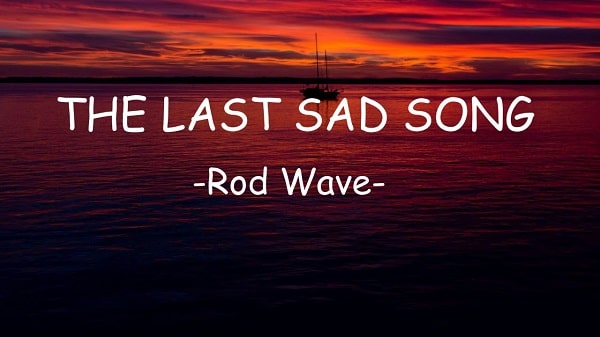 The last sad song lyrics rod wave from album Pray 4 Love. This song was written by Rod wave. Song starts with Ain’t get to talk to grandma, but I know she feeling bad We lost auntie Barbara, right after we lost grandad.

Ain’t get to talk to grandma but I know she feeling bad
We lost auntie Barbara, right after we lost grandad
Times gettin’ harder, it be too much on my brain
I know Deja’s smilin’, the only one who understood my pain
It’s safe to say it’s gettin’ deeper
‘Cause the reaper takin’ my people, my dreams are gettin’ cheaper
But music ain’t felt the same since I met Timmy and Quesha
I was laying on my bed, finna write me a poem
And my phone started ringing, it was homie
And he told me if it ain’t killing you, nigga, it’s making you stronger
Stay far away from fuck niggas and the Corona, and I smiled
Yeah, I smiled, ’cause I been battlin’ these demons since I was a lil
child

Time to let ’em go, I just thought I’d let you know that my heart been broke
Ever since I jumped off the porch
I come out that bottom
I was swimmin’ with the piranhas
And for them commas, I would tie up a nigga momma
Fueled with aggression, in the middle of a depression
Bitch, I was stressin’, feeling unwanted and accepted
Kicked out the house
Goin’ back and forth with ol’ girl at ol’ nana couch
Feelin’ like fuck the world
Still to this day, I can hear myself say
Get off your ass, it’s time to go make somethin’ shake
This ain’t Hollywood, this the middle of the trenches
That was the beginning, a young nigga finally did it
Niggas be in they feelings, we stack that money to the ceiling
I ain’t left the house in two months and I made two million, so so so

I am a savage classy bougie lyrics

Splash now that you know how my ice be lyrics