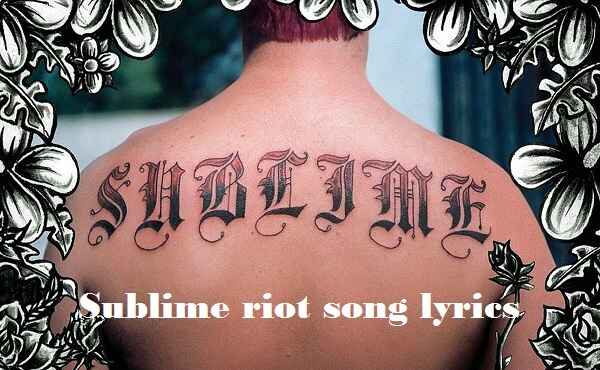 Sublime riot song lyrics April 29, 1992 is the viral song. Main song lyrics are April 26th, 1992 There was a riot on the streets, tell me, where were you? You were sitting home, watching your TV While I was participatin’ in some anarchy.

“I don’t know if you can
But can you get an owner for Ons, that’s O-N-S, Junior Market?
The address is 1934, East Anaheim
All the windows are busted out, and it’s like a free-for-all in here
And, uh, the owner should at least come down here
And see if he can secure his business, if he wants to…”

April 26th, 1992
There was a riot on the streets, tell me, where were you?
You were sitting home, watching your TV
While I was participatin’ in some anarchy

First spot we hit it was my liquor store
I finally got all that alcohol I can’t afford
With red lights flashing, time to retire
And then we turned that liquor store into a structure fire

Next stop we hit it was the music shop
It only took one brick to make that window drop
Finally, we got our own P.A
Where do you think I got this guitar that you’re hearing today?
Hey!

When we returned to the pad to unload everything
It dawned on me that I need new home furnishings
So, once again, we filled the van until it was full
Since that day, my living room’s been much more comfortable
‘Cause everybody in the hood has had it up to here
It’s getting hotter, and hotter and harder, each and every year
Some kids went in a store with their mother
I saw her when she came out, she was getting some Pampers
They said it was for the black man
They said it was for the Mexican, and not for the white man
But if you look at the street, it wasn’t about Rodney King
And this fucked up situation, and these fucked up police
It’s about coming up and staying on top
And screaming, “187 on a motherfuckin’ cop”
It’s not in the paper, it’s on the wall
National Guard
Smoke from all around

(“Units, units be advised there’s an attempt 211 to arrest now
At 938 Temple, 938 Temple
30 subjects with bags, trying to get inside the CB’s house
He thinks they’re gonna start to try to kill him”)

Know that you are good enough lyrics – Lillian Hepler

Splash now that you know how my ice be lyrics