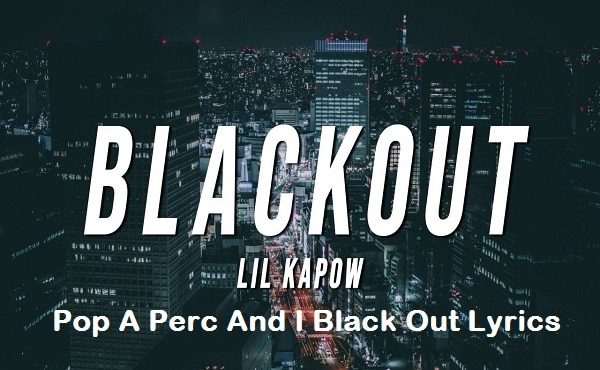 Pop A Perc And I Black Out Lyrics

So it’s either top or I’m out of here

Pop a Perc’ and I black out
Fuck it, I’m blowing her back out
WWE if she fuckin’ with me
Put the pussy on SmackDown, gang, gang, gang, gang
And this not a trap house
I’m in a condo, you know I’m up now
I don’t know how to use a computer

But trust me, bitch, I bring the MAC out, gang, gang, gang, gang
I’m with an e-girl, this not an e-date
I pop these pills, fall asleep for like three days
Up all night on a motherfuckin’ school day
Cheese on my head like I’m playin’ for Green Bay
I fell asleep on September first
Wake me up at the end of the month, no Green Day
Turn that blick sideways, let it rip like a fucking Beyblade
I just got back from Paris, watch my money go up off a fuckin’ exchange rate
I don’t claim gang, but I got two dicks on me every goddamn day, ayy, gang, gang
Gang, gang, gang, gang, gang

That’s seven days a week, you pussy niggas weak
And I’m ’bout to feast, bitch give me brain like a geek
Freeze, police
Bitch, I ain’t stopping for shit
You gon’ have to shoot me, on God
I got an Uzi, extended the clip
Now that shit is tall, Lil Uzi
Choke the shit out a bitch, look at her neck
Those are not hickeys, they bruises
Look at my bag, it’s Louis

I get more neck than a motherfuckin’ crewneck, on God
My numbers went up, how he do that?
I’m on your block making noise like a jazz band, ba-na-na-na-na (Ayy, ayy, ayy)
Paint my nails and bitch-smack the piss out a nigga
He thought I was soft, why? Whip Megatron
This bitch suck my dick when she heard what it cost, on God
Blicky and Becky at prom
She shake her ass on my motherfuckin’ Glock
Um, pause, I got the sauce
Stand on my money, I look like The Rock, gang

Let me hear that shit one time