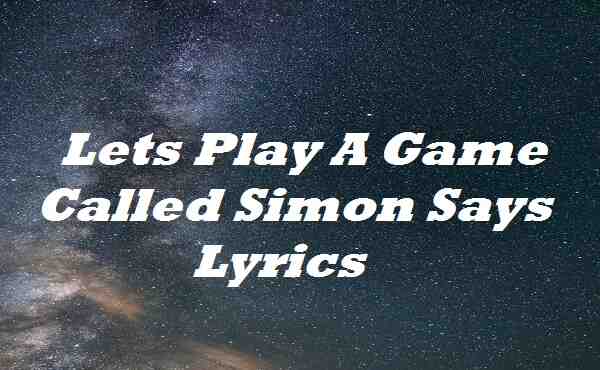 Bust a move, let’s play a little Simon Says
So take your places and listen to the rhymin as
I like display a new style that just may
Leave suckers runnin for the door in total dismay
Yeah, by now, so you’re startin to
Get a little hype, but first get a partner
And proceed full speed right to the dance arena
I really doubt it, but maybe by chance you seen a-
Nother brother more inclined to play the part of Simon
Than the Master Ace who knows the art of rhymin
Like a shark knows the finer points of swimmin
Like Steady Pace know the cuts and the fly women
And so before we start this game
Simon says: get up, and yo, I do the same

Simon says: it gets badder, and you never had a
Beat that can heat your feet, and still add a
Theme with so much steam, it makes sweat pour
]From your faces, and the Ace is sure
Gonna do it, as you listen to it
See, I navigate ya straight to help through it
I’m Simon, rhymin, climbin on time, and
On a mission, that’s the position that I’m in
Takin you there, makin you care
I’m achin to tear up the floor, but I don’t dare
Leave the mic sittin, gettin cold without my hand on
Those that dance don’t have a foot to stand on
And those that don’t dance, yo, you oughta know
Simon says: wall flowers aren’t allowed to grow

Simon takes the stand, just as planned
And I display in a ray that’s rather grand
Now I agree, there are many who said ‘party’s off’
But if one of them says, he drops arty soft
See to drop hard you must have the kind of mind
That’s refined and artistically lined
Cause yo, it takes nack if you wanna attack
Attract with such skill, and still fit the bill
Ace and Action, few can come harder
Than we come, uhm – here’s some, but only part of
The gift that can lift the myth that is swift
Only boast the most, yo, Simon says: if
If your partner’s face is in place with your taste
Then haste, you better push up, no time to waste
So if you’re with it, you better get it, don’t try to sit it
On a chair and stare like a square, brother, quit it
There’s no time for nerds and geeks, only freaks
With the sexy cheeks, as the Master speaks
And for weeks and weeks you will dance and prance
To the rhythm I enhance with my chants
So here’s a glance at a jam that’ll nullify
And fry all the rest, bust the color
Red, orange, yellow, green, blue, in the gold and violet
This jam is fly, and I’m the pilot
Flyin you straight to the end of the rainbow
Steady and I try to open your brain, so
You can accept what was carefully kept
Till the fun stops, then the party was pepped
Up, and if you stepped up, you couldn’t hold your place in a chair
So hail Simon, the brother Master Ace in the rear

Someone Call My Bestie Tiktok Lyrics