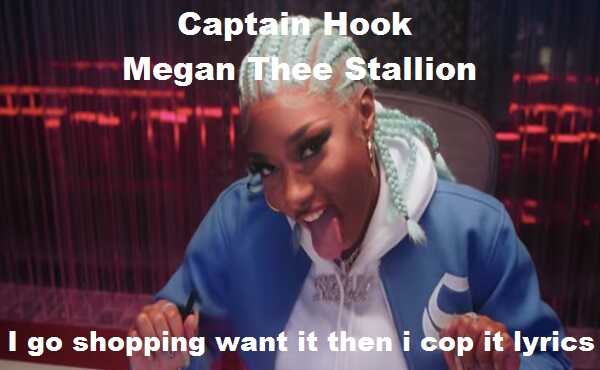 I go shopping want it then i cop it lyrics

Real Hot Girl shit, ah
(And if the beat live, you know Lil Ju made it)

Ayy, B^tch, I’m a problem nobody solvin’
You can keep hating, I’m poppin’ regardless
He want a B^tch look like Megan Thee Stallion (Yeah)
Don’t want your nigga ’cause I want his daddy
I like to switch up my style every week
I gotta switch up my hair every day
I ain’t no ho, but I do be on go
And I promise my nigga’s gon’ love me the same
I’m a Hot Girl, don’t try it at home
I wear the shit that be showing my thong
I like to drink and I like to have sex
I f^ck the niggas that’s cutting the checks
Dance on the d^ck, now, you been served
I like a d^ck with a little bit of curve
Hit this p^ssy with an uppercut
Call that nigga Captain Hook

I love niggas with conversation that find the clit with no navigation
Mandatory that I get the head, but no guarantees on the penetration (Huh)
I be texting with a bi chick, we both freaky, just trying shit (Mwah)
Main nigga getting super jealous, he don’t even know about the other fellas
I need a Mr. Clean, make that p^ssy beam (Ooh, ooh)
Okay, I just might need a baker, make that p^ssy cream (p^ssy cream)
Okay, you woke up mad at me ‘fore you even brush your teeth
Mm-mm-mm, that’s just super sad, f^ck it, carpe diem, ah
I’m so indecisive, you can’t cuff me, but I’m wifey (But I’m wifey)
I just want a nigga who gon’ slurp me like an Icee (Slurp me like an Icee)
B^tches bite me so hard, had to put them on a diet (Put them on a diet)
B^tch, this ain’t no tryout, so lil’ ho, you better not try me (Ho, you better not try me)
I got a man, I got a B^tch
I’m a banana, they gotta split (Hey, hey, ah)
One in your top, one in your tip (Hey, hey)
One for the club, one for the crib (One for the crib)
My nigga fine, I wanna f^ck
Ice in his mouth, eat me up
Rockin’ his chain, wearin’ his ring
Gettin’ some brain, ah, ah, ah

Hot Girl Summer, I ain’t f^cking with no drama, huh (F^ckin’ with no drama)
He was tripping, so I hung out with his partner, huh (Hey, with his partner)
f^ck him good, introduce me to his mama, huh (To his mama)
Thought he had me ’til I came out with the condom, huh (With the condom)
Drinking D’USSÉ out the motherF^ckin’ bottle, hey (Out the motherF^ckin’ bottle)
I’m a rapper, not no motherF^ckin’ model, huh (Not no motherF^ckin’ model)
Got a nigga, but I think I’ll have another, huh (Think I’ll have another)
I’m too sexy to be f^cking under covers, huh
I know you know me, I ain’t gotta introduce shit, hmm (Introduce shit)
Same crew, I ain’t hanging with no new B^tch, hmm (Hangin’ with no new B^tch)
I’ma buy it when I land, I rock new shit, hmm (B^tch, I rock new shit)
I ain’t f^cking with that nigga, I got new d^ck, hmm (Woah)
Please don’t try me, lil’ B^tch, you know I’m with that, hmm (B^tch, you know I’m ’bout that)
I’ll break a ho in half like a Kit-Kat, hmm (Like a Kit-Kat)
Please don’t ask me ’bout it if you know I did that, huh (B^tch, you know I did that)
Not a stylist, but I’ll push your f^cking wig back, huh

I am a savage classy bougie lyrics