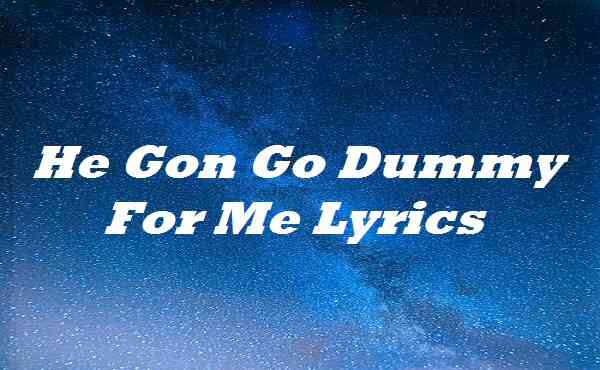 He Gon Go Dummy For Me Lyrics

Real motherf^ckin’ hot girl sh^t, ah
Still runnin’ through the mall with your motherf^ckin’ daddy
(And if the beat live, you know Lil Ju made it)

I’m a hot girl, I don’t do titles
If I do date, it’ll be Michael
Keep sh^t spicy, T.I.P and Tiny
Yellow bone chick look like Kehlani
Freak in the sheets, freak on the beats
n^^gas been hooked since “Big Ole Freak”
I realized that I was the sh^t when R&B n^^gas wanna start rap beef
These n^^gas ain’t got no name on ’em
Wish these hoes stop tryna put claim on ’em
He come around me, get game on him
If hе on go then I already came on him
Thеse new hoes sound like my mixtape
b^^ches love saying my name like it’s clickbait
I don’t take sh^t if it come with conditions
I don’t rock sh^t if it come in his name
I’m not your bed or your couch so don’t sleep on me
Look like a lick then I’m puttin’ the freak on him
All of these n^^gas is beggin’ to hang
‘Cause my b^^ch a Young Thug and I am the Rich Homie
Boy, I ain’t finna read all that text
Don’t know what it said, but I sent, “That’s a bet”
Lately, my patience been getting real low
Lately, I feel like I need more respect
It was the money for me, ayy, he gon’ go dummy for me, ayy
He ain’t that cute, but he could dress, it’s the Patek for me, ayy
It was the knees for him, hmm, the way that it squeeze for him, ayy
He done f^cked a whole lotta b^^ches, but it was the me for him, ayy
Y’all wanna take me out so bad, I make all of y’all hoes so mad
Hoes went and bought them big ass teeth, even y’all smiles still goin’ out sad
Hoes got jokes, but don’t ever wanna stand up
Hoes got balls, but you know I got handles
Damn, I must be Olivia Pope ’cause y’all keep puttin’ me in all of these scandals
He wanna hit one more time, I ain’t Britney
Don’t need no closure, my diamonds got clarity
Tellin’ his new b^^ch that he don’t do Instagram
Really, he hate when he scroll and see pics of me
Like a new show, all these n^^gas is into me
Funny how besties turn into my enemies
I must be playin’ peekaboo ’cause these hoes really can’t see me, ah
Primis Player Placeholder

Stop What The Hell Are You Talking About Lyrics