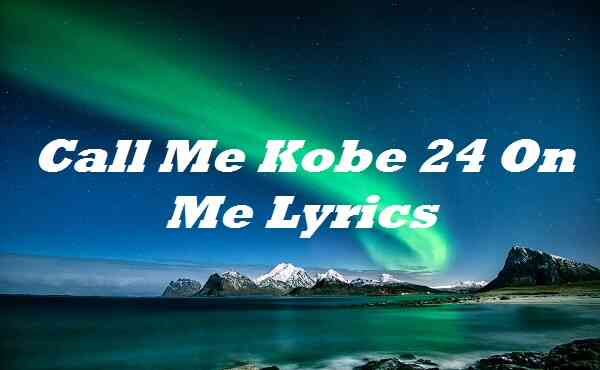 Call Me Kobe 24 On Me Lyrics

He’s the best player in the game;
It’s just that simple.
There’s nothing that Kobe Bryant can’t do.
He will defend your best player.
He will shoot from the perimeter.
He will get all in your monk,
He will do whatever it takes,
He is the most complete basketball player in the game today, far none.
He has an assassin’s mentality.
I said this once, I said this when the trade went down,
And I’ll repeat it again.
Who’s starvin more for an NBA world championship more than Kobe Bryant?
There is no one.
This guy is highly motivated.
(What seperates Kobe from the pack?)
More than Kobe Bryant? There is no one.

Okay K-Kobe doin’ work
2-4 on my shirt
He the greatest on the court
And I’m the greatest on the verse
Goin’ for the 4th ring like it was his 1st
Gotta get the gleam,Do it for Kareem
2-4 so nice my flow is so mean
Catch me at the game sittin next to Goldstien
K-Kobe Bryant nike’s purple gold strings
K-Kobe in the game dunkin on the whole team
Bla-black mamba, attack conquer
Basketball beast, ra-rap monsta
Crossover good or turn-around jumper
Or just drive the lane and dunk on dunkers
You know where its goin, its goin down yo
This is the Lake show, but don’t drown though
I call him King Bryant, now let the crown show
definetly, I’m just lost for words. I mean he’s amazing.
Pass me the damn ball, I don’t need a pick at all
And don’t worry bout my shot cause imma get that off
Yeah, I drops 40 on your double team
Then I drop 81 on another team
Yeah, you better guard me with caution
And watch me work em like an option, haha
No such thing as exhaustion,No time for resting
Cause I dont take breaks, I just break records
Ha, and I prefer the ball with 3 seconds
And I bet we gone win it all in 3 seconds
Ya digg, that is a guarentee, apparently
And please tell your defense don’t never man to man with me
Double team, triple team, you defenders tickle me
But, I never let them get to me, literally
Step back and give em a 3, ain’t no defending me

(And one guy certainly envious of the way Bryant’s been playing lately, LeBron James.)
I’ve been called to say that he’s definetly the best player in our league. To me in my eyes, the best scorer in our, in
our, league. And I don’t no if there’s, there’s not another player that can accomplish some of the things that he’s doing.

Never take a day off, catch you at the top of the key and get a J off
Baseline, face time, tongue out like 2-3
Even 2-3 gotta love how I do me
Pra-Practice while you sleep
Practice in my sleep
Straight outta high school, the brackets ain’t for me
I will be jumping over you like I gotta matress at my feet
And all Phil Jackson say is you better be passin it to me
I put the master in the piece
Attack it like a beast
And I am starvin for victory, and that means I’m gone eat
And when they ask you who’s the best then the answer should be me, haha
(-“Who’s the best player in the NBA?”
-“Ohh, say it’s Kobe Bryant.”
-“Really? Why?”
-Cause you never know what your gonna get.)
Call me Mr. Clutch, or Mr. Automatic
I can post them up or Lamar gone get the alley
I’m goin for the ring, I’m goin for the ring
I went to Bejing and came back with the bling
Who they want, they want Kobe
And what he want, he want the trophy
The victory, and the glory
No Shaq, no Robert Horry
Now Kobe break em off, Kobe break em off, yeah
You better be where the Lakers are
Just give him the ball and he takin off, yeah
Or he probably just dishin it to Gasol
Or give it to D.Fish on the wing, yeah
Or just let lil Ariza do his thing, yeah
Cause im great and so is my team, yeah
Do it for Magic, it’s your time baby
I see nothing wrong with doin it 4 times baby
I’m the best yes, and he the best yeah
Don’t worry LeBron, get em next year
Now whats defense to an assassin
Killa instinct, murder the basket
Then steal the ball back, hold it for ransome
It’s more than a game, this is a passion
Been an all-star, been a champion
Free throw line, you hear them chanting
MVP, MVP, Kobe Bryant aka M-V-Me
In knee deep, smashed in knee deep
Whoever he is, he can’t guard me, haha, he can’t guard me
(So there you have it. The over whelming answer was Kobe Bryant.)

Thank You For The Happiest Year Of My Life Lyrics