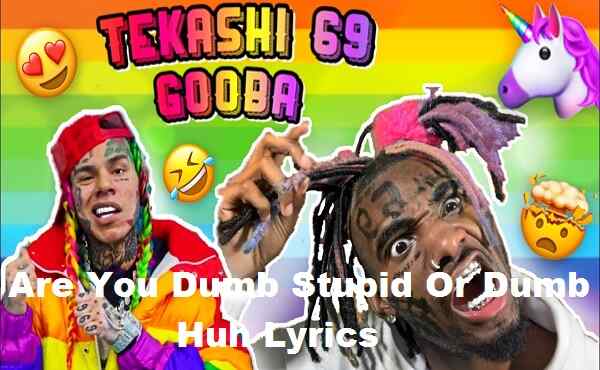 Are You Dumb Stupid Or Dumb Huh Lyrics

I tell a nigga don’t dick ride, don’t blick ride
Leave it to the double thick thighs, twin sisters
Drop it down and wobble, wobble up, mami booted up
She get down and gobble, gobble up ’cause my money up
Slide, slide in the Bentley truck-a, the Wraith truck-a
Your bestie is a dick sucker, I big dub her
As-salama-lama alaykum, you big hater
You nothin’ but a hater, hater, clout chaser

Tell ’em get up out my face now ‘fore I grrt
Are you dumb, stupid, or dumb, huh?
Play me like a dummy, like b^tch, are you dumb?
Are you dumb, stupid, or dumb, huh?
Yeah, you got some money, but you still fuckin’ ugly
Stupid, listen
When I talk, you better listen
We can make him dance, bachata
Slide over, do the cha-cha
Grrt, bah-bah
Make a nigga go adios
Dímelo, mami
Fresca, you nasty
Flame up, light it
They see me and get excited
Two step, spin around, so fly, pilot
They sick, been hot way before Coronavirus
Nigga, who did that? Nigga, who did what?
Nigga, that’s my shit, don’t bite it